This year’s Tuska only sported three stages, the Radio Rock and Inferno outdoor stages and the Club stage inside the Kattilahalli building. Maybe because there was one stage less than the year before or because the beer area was located at a different place, conveniently so that both outdoor stages could be seen, but there was more time to enjoy a cool beverage between or while watching bands which proved to be the perfect thing way to enjoy two other crowd favorites that afternoon: Wintersun and Ihsahn. The attempt to also have a listen at Torture Killer that was playing at Club stage failed as the Kattila hall was close to bursting and the amount of oxygen in the air was already dangerously low at the entrance. But not to be disappointed, Bolt Thrower was up next and nailed it. Overall, Friday was a very packed day both with good bands and people which lead to having to queue for quite a while for almost everything. But with Amorphis in the ear and King Diamond as the final act the good mood was not spoilt. King Diamond then also was an absolute highlight and the kinkku, as the Finns lovingly call him, enchanted the crowd with a versatile show. 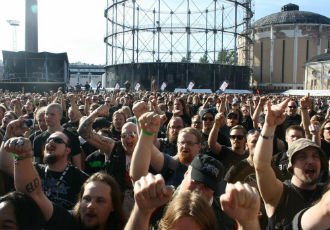 Despite the promised rain, Saturday started off sunny and the Finns from Stam1na had adapted their outfits accordingly, taking over the stage and firing the crowd up in hula skirts. On the inferno stage, the black metal veterans Von did not lose their cool composure in face of the Finnish sun and spread darkness. With Kreator, Urfaust and Testament scheduled next there was little time left to enjoy the festival amenities that ranged from the food corner with a nice sitting area and a Darrabaari (Hangover bar) that served delicious alcohol-free drinks to even a festival laundromat! Kreator delivered finest German Thrash while personal festival winner Urfaust created an amazing atmosphere in the Kattila hall where this time around there was enough space and air. Testament with Native American singer Chuck Billy ended the night with a blast. 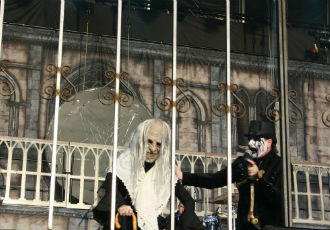 The weather forecast for Sunday had been rain all day long but instead the sun was glaring down hot on the Inferno stage where Deathchain took the stage as the first band at 2 p.m. on Sunday – always an ungrateful time and day to play but there was already a good amount of people there to see them. The rest of Sunday’s schedule was more on the melodic and rocky side with Amaranthe first up on the Radio Rock stage and Stratovarious playing their tunes on the Inferno stage. But the most awaited band of the day was clearly Nightwish with their new singer Floor Jansen. The word before had been she is a good front woman, singer and performer all of which proved to be right. In their 90 minute show Nightwish and particularly Floor blew away even persons that are not Nightwish fans otherwise. Their show had a good mix of older and newer songs such as She’s my sin and Last Ride of the Day. Floor and the guys clearly had a blast on stage and the audience loved every minute of it. Nightwish were the last ride of the day and what a ride it was – the perfect way to end three great days of music, sun and friends. Until next year!