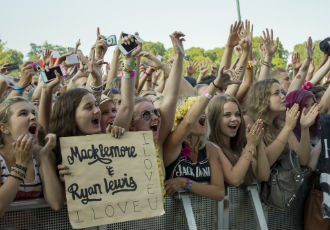 At 44, Ruisrock is the second oldest festival in Europe and one of the most important music events in Finland.

SINCE 1970 the small island of Ruissalo in Turku has hosted the legendary rock festival of Ruisrock. What started as a demand by a group of students to have rock music represented in the orchestral music festival of Turku has evolved into a three-day rock congregation.  Through Ruisrock’s stages have passed rock legends such as The Clash, Thin Lizzy and Chuck Berry, as well as big names of modern rock like Bon Jovi, Red Hot Chili Peppers and Nirvana. Headlining this year’s edition were English electropop duo Pet Shop Boys, Finland’s international love metal band HIM, and Scottish rock band Biffy Clyro, together with the some of the best bands of the local music scene.

Ruisrock is divided into 5 stages, which in this year’s edition fitted over 71,000 attendees during the three-day festival. The main stage rumbled on the opening night when British synthpop duo Hurts appeared to perform their elegant hit songs Wonderful Life, Exile and the melancholic Stay. Following Hurts and closing the day at Niitty Stage came Michael Monroe. After playing over 14 editions of Ruisrock (both with Hanoi Rocks and MM), Monroe has become the resident rock act at Ruisrock. Together with ex-Backyard Babies Dregen, Michael Monroe performed a true rock and roll show, with sweat, rocking guitar solos, fireworks and even stage climbing.

There is more to Ruisrock than just the big international performances. The smaller stages like Louna and Miniranta are the perfect places to see the best Finnish acts of the moment performing live. On Saturday, Pertti Kurikan Nimipäivät, from the award-winning documentary Kovasikajuttu (The Punk Syndrome), demonstrated how being learning-disabled doesn’t stop them from putting on an exceptional punk show to a devoted audience. Before Pertti, east Helsinki’s pride, Notkea Rotta featuring SMC Lähiörotat, blasted their mix of Suomi-räp and rock to a packed Louna stage, which sang along to their street rap classics Juo! Syö! Nai! and Mitä iistimpää, sitä siistimpää (Finnish slang for “what is more to the east, is cooler”).

The final day at Ruisrock festival was marked by the short but entertaining performance of Macklemore & Ryan Lewis at the Ranta-Lava (Beach Stage). With a one-hour show, Macklemore performed just seven hit songs from his latest album, The Heist. The shortage of songs was compensated for by Macklemore’s charisma (he even carried out a Cheese Ball eating competition with two fans from the audience) and the burst of euphoria after the 5-minute build-ups into incredible songs like Can’t Hold Us and Thrift Shop.

After 44 years, Ruisrock Festival is a well-oiled machine. The concerts stick to schedule and sound decent, and small details like enough water points and transport connections are appreciated by those who endure the weekend festival. The 45th edition is already on its way in July 2014 to offer the best of the international and Finnish music scene.