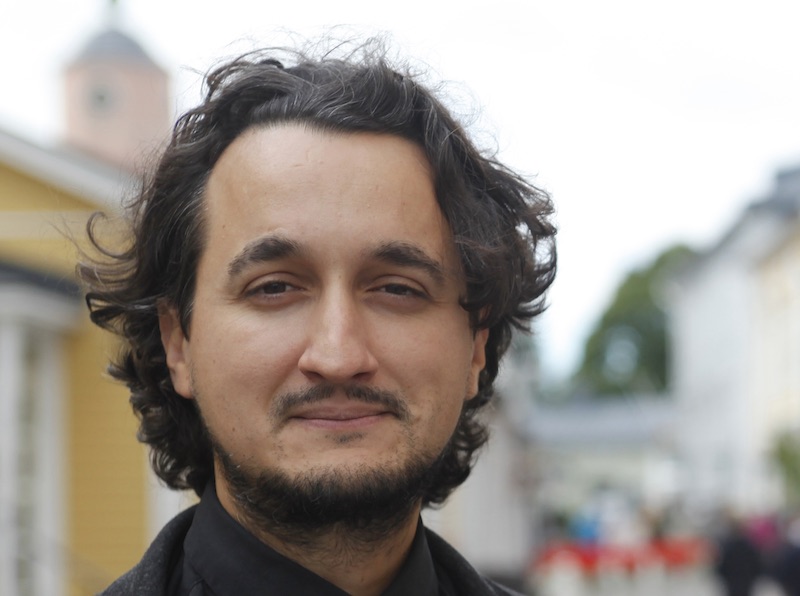 I was challenged two months ago, by two political parties in Helsinki, to run as a candidate. This was due to my successful work against the Guggenheim Museum in Helsinki. My immediate answer was that yes, Helsinki does need to have someone to represent the growing 14% of non-Finnish, non-Swedish voters. Nevertheless, I do not believe in political representation, nor in politicians. After some thinking and some talks with my two best existential advisers, my two kids, I came to a conclusion: Yes, there is a way for people like me, who do not believe in slaves, thus also not in masters, to constructively improve the current governmental form of organization: through Direct Democracy and an end to political careerism.

My life's work on architecture, activism, the public understanding of science, as well as my research on democracy all over the world, has awarded me with enough wisdom on different modes of governmental structures. I have explored many pathways to improve society and myself along with it, so this one should be taken as well. Yes, democracy is here to stay (whatever its form), not anarcho-syndicalism, but it is possible to reach levels of direct democracy so high that the absence of power of professional politicians could be gradually dismantled. I therefore proposed to make a campaign and a mandate as an independent under the Left Alliance list, in English, based only on two goals:

My immediate goal is not to represent voters but to give them direct decision power, NOW.
Every decision that I will make will be previously voted electronically by the group of people who wish to follow me, regardless of my own opinion. I will send them an explanation of the problem in English, on which they will vote. I will then represent the voted decision in the council and in every other meeting I attend. Even if not perfect, this method will show an important example.

My long term goal is to bring an end to professional careers in politics.
Research shows that a diverse group of problem-solvers makes better collective decisions than a group of experts. Everyone ought to be a "political animal" and to feel included by having a real voice, daily. Therefore, we need to question the career of the politician, who is often detached from local problems. Meaning, if I become a paid politician, my task will be successful only when I again become an amateur politician.

In reality, we have an outdated system of public speakers (politicians) deciding on all matters, regardless of their expertise. The result is that we spend more time talking about the politicians instead of discussing the policies. In practical terms, and for lack of a better approach, it is preferable to widen the decision-making process and include the whole population. Educated citizens will also know when their voice should be heard or when to stay neutral. The citizens of Helsinki do have a great civic education in order to make asserted decisions and to avoid corrupt behavior. For example, as a Civil Engineer, I will certainly be engaged in discussions regarding the tunnel between Tallinn and Helsinki, but I will not cast so many votes in topics I am not so related to or interested about.

So, we can gradually introduce direct democracy, either through technology (e-voting) or by gradually modifying our representative system into one where local citizens are randomly and temporarily elected for office (Demarchy).

In a money-based society, everyone has a price. The old wisdom holds that power corrupts. The voters should question everything, especially me! Voters should develop critical thinking and analyze for themselves what is being laid out for them, just as this text here. I will do my best to be neutral, but I am as human and as prone to corruption as any other human being. We must not continue as spectators, nor must we believe that there will be one person who will be righteous all the way through. My voice should be questioned and heard as all others should be.

Now, as in the movie, vote for Pedro, so you can vote every day, and not just every four years!
My task is solely to inform, not to rule.

Pedro Aibéo is a trained Design Architect (M.Sc., Dipl. Ing., TU Darmstadt, Germany) and Civil Engineer (M.Sc., Licenciatura, FEUP, Porto) with over 50 buildings designed and built in 15 countries. He is also a Visiting Associate Professor at UNAM University, Mexico, and at Wuhan University of Technology, China, and a Lecturer, Research Assistant, and Doctoral Candidate at Aalto University, Finland, on "Architectural Democracy." He is the founder and Artistic Director of "Cidadania" theatre+games group, Germany, with written and directed theater plays at the United Nations and the Staatstheater Darmstadt on urban slavery and astronomy. He is a professional musician at "Homebound" and the founder and Artistic Director of the "World Music School." He is a drawing teacher at the croquis nights in Helsinki and a comic novel writer on mathematics. He is a published current affairs author in several newspapers.