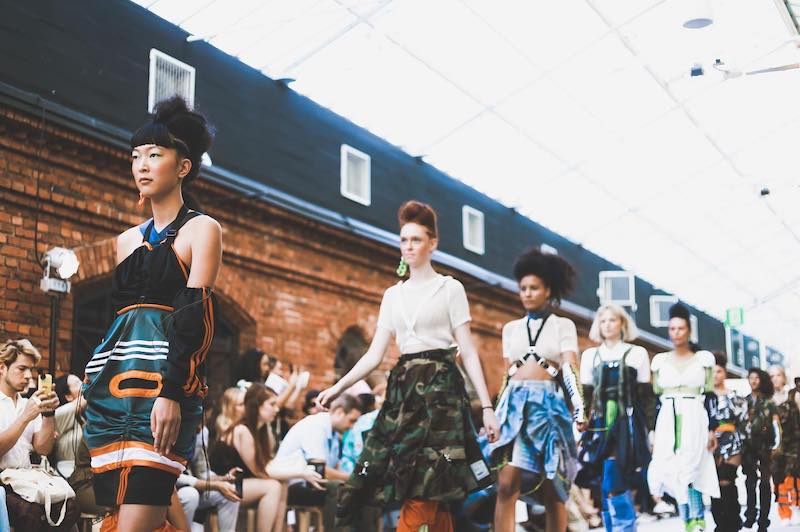 A “Bio-Playground”, including photographs, clothes and sustainable fabrics was showcased at Wanha Satama where among others, a hundred percent vegan “leather” was displayed by Ultrafabrics inc. The process and material for making this special leather like fabric were displayed as well, and attendants had a chance to view the fabric under a microscope.

Clarion Hotel Helsinki was the venue of a designer showroom, where this years designers had put their clothes on display, allowing the audience a closer look and touching the fabrics of what had just been showcased on the runway.

A combination of activities were provided at the garden of Palace of Nobility, nicknamed “Ecosphere” for this event, where anyone could sit on a garden bench and enjoy tea, or participate in a yoga session or a kombucha workshop. Kombucha is a tea based drink that is brewed using Scoby yeast. Participants were given a bottle of kombucha that they could flavour with ingredients like lemon, ginger, strawberries, mint and spruce sprouts to mention a few.

Designers based in Berlin, London, Taipei, Seoul and other fashion capitals, put on amazing shows, displaying their innovative clothing, which of course, were all sustainably made.

The very first show of the fashion week was by Finnish designer  Veera Konga. Therapy Recycle + Exorcise from Berlin had a collection with a lot of straps, neon colours and camouflage print presented later that day.

Saturdays last show by Patrick McDowell was memorable both for the set up and the designs. The show was held outdoors at seaside at Clarion Hotel, with an amazing sea view. A drag queen was dancing on a sea scout boat. The theme of the show was firefighters, with one of the models was wearing a firefighter helmet decorated with rhinestones.

Sunday started with a show from Kata Szegedi at Wanha Satama, and later that day a Finnish designer duo Burlesque Tsunami, impressed the audience with a unique, colourful and playful style of design. The HFW presented five shows a day with over 17 designers presenting their collections. Mondays was the exception with 3 shows, the first of which was by Sanikai, known for its simple and elegant style. The fashion week was closed with a runway show from Bleu Chose.

Helsinki Fashion week is a pioneer in sustainable fashion. All the clothes on display were made from recycled and sustainable materials, the makeup and hair products used were also vegan. The food was made from food waste and the water was brought by HSY, the waste management and recycling arm of the city of Helsinki. People and the staff could ride Voi scooters, which was collaboration partner of the event, from one place to another. Helsinki Fashion Week proved once again that fashion and sustainability can go hand in hand. All it takes is conscious everyday choices and the passion to have a lifestyle better for the environment.