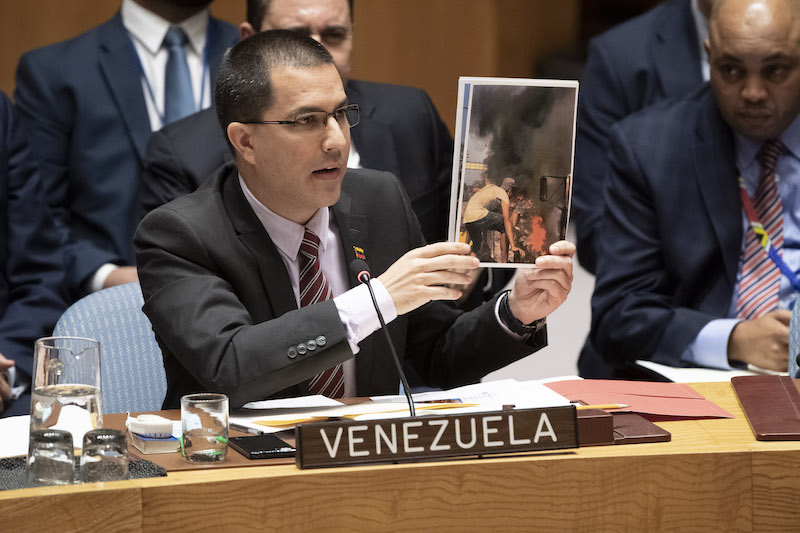 US Maneuvers at the United Nations

The entire official schedule of meetings of the United Nations Commission on Disarmament – April 8 through April 29 – was forced to cancel because the United States, in violation of its obligations as host country, refused a visa to important Russian delegates.

On April 25, Venezuela’s brilliant, charismatic Foreign Minister Jorge Arreaza (right) detailed, in a United Nations press briefing, the horrific suffering the Venezuelan people are enduring as a result of the dictatorship of US sanctions against his country, and US terrorization of each and every global institution and nation which the US is demanding sever all economic and diplomatic ties with Venezuela.

The U.S. maneuvers to destroy the Maduro government’s UN accreditation, and replace it with their puppet Guaido are horrifying and Machiavellian, and, quite realistically, since the US has absolutely no scruples, nor any respect for international law, there is an ominous possibility that they may succeed.  Numerous diplomats of many countries, with whom I have spoken, are terrified by the sanctions the US just placed on the Venezuelan Foreign Minister, recognizing the threat to their own sovereignty, and sophisticated Iranian specialists delineated the dangerous possibilities the US has to use this method to force out the Venezuelan delegation to the UN, and de facto denude the Maduro government’s access to the UN.  If the US succeeds in this criminal scheme, the credibility of the UN will be entirely and irreparably destroyed, as the many diplomats with whom I have spoken have confirmed.  Many delegates are now saying that the UN would be better based in another more reliable and respectful country.  Venezuela is Chairman of the Non-Aligned Movement, an organization of 120 member states. For the US to sanction her Foreign Minister is an unconscionable and intolerable abuse of the host country status.

The US has, furthermore, forged another mafia-style organization of flunkey Latin American “governments” which give every indication of becoming  a new Operation Condor, that systematically organized engine of murder arranged by Augusto Pinochet and Henry Kissinger, (image left) an international organized criminal plan to exterminate all progressive and humanitarian efforts throughout Latin America and beyond.

Operation Condor orchestrated the slaughter of Chilean former Foreign Minister Orlando Letelier in Sheridan Circle, Washington, DC in 1976. Letelier bled to death after a car bomb arranged by Anti-Castro Cuban terrorists tore off his legs. An American girl working for the Institute of Policy Studies, Ronni Moffett was also killed in that terrorist action.  In Argentina, Chilean General Carlos Prats was murdered when his Buenos Aires home was bombed;  in Rome, Chilean Senator Bernardo Leighton’s wife was crippled by an assassin’s bullet intended for him;  Operation Condor arranged the murder of former progressive Bolivian President Torres in Argentina.

Diabolic Methods Used by the US to Wreck Venezuela

In a colossal report entitled:  “Economic Sanctions as Collective Punishment:  The Case of Venezuela,” and corroborating everything stated by Foreign Minister Jorge Arreaza, economist Jeffrey Sachs and Mark Weisbrot describe the diabolic methods used by the United States to wreck Venezuela and discredit socialism, resulting in the deliberate murder of at least 40,000 Venezuelan people, including children, the elderly, the infirm and other of the most vulnerable civilians. This is a systematic and deliberate policy of the US government, a heinous plan to exterminate socialism and massacre the Venezuelan people in order to steal their oil, a spectacular act of piracy brazenly conducted with the collusion of obedient puppets in Western Europe and Canada, and craven, obsequious Latin American states whose shameful obedience to Washington is breathtaking.

Washington is now threatening to completely blockade and sanction Cuba to force that country to sever relations with Venezuela. Nicaragua is, of course, also in the crosshairs.

Yesterday there was a failed coup, provoked by the Quisling Juan Guaido, (image right with Lopez) who incited a military revolt to violently overthrow the democratically elected government of Nicholas Maduro.  If Joseph Biden or Bernie Sanders, or any American citizen advocated the violent overthrow of the US government, they would be imprisoned and/or executed.  It is astounding that the Manchurian candidate Juan Guaido, advocating the violent overthrow of the Venezuelan government, is allowed to roam free, throughout Venezuela.  This is incontestable proof of the impeccably democratic character of the Maduro government. And perhaps it is proof of Maduro’s strength and trust in the Venezuelan people.  But Maduro’s life is at risk for his country. During yesterday’s emergency, Venezuelan Ambassador Samuel Moncada convened a UN press conference, and skillfully replied to often slanted and biased questions  for which Moncada was well prepared, and had no doubt anticipated.

The US government is disintegrating, and has been for many years, with the current administration rife with internecine warfare.  The French government is confronting an incipient popular revolution of the Yellow Jackets, the British government stymied by Brexit and separatist movements threatening the survival of the “United Kingdom.”  It is only with the most flagrant arrogance that they criticize Venezuela.

It is agonizing to witness the mass murder of a heroic and progressive Venezuelan people, by a psychopathic capitalism which has not one iota of human decency, and wallowing in its cannibalistic behavior, desecrates the very concept of human rights.  But that is the essence of monopoly capitalism, whose “highest” stage is fascism. One can only hope that Russia and China will recognize the future menace to their own survival, and will not indulge in the wishful thinking of a “win-win” arrangement with Washington. One can only hope that the crucible of Venezuela will prove to be the Stalingrad of this de facto World War III, and it will be on the battlefield of Venezuela, with its transgenerational legacy of Simon Bolivar, that fascism is defeated, and the future progressive destiny of humanity will be forged.