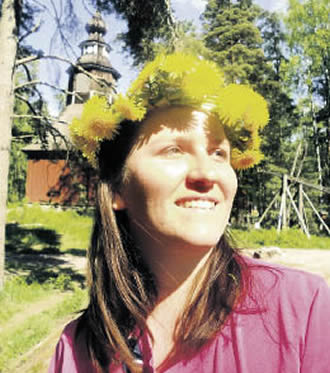 Finland really feels like a second home to me, although my home country is located about 2,000 kilometers southwest from here. Slovenia, located on the sunny side of the Alps - as travel guides say - has became more and more popular for tourists. Unfortunately, under the nice touristic surface there's a big problem of unemployment for young, educated people. This is the main reason I returned to Finland, where I first did my exchange program as a journalism student in Helsinki.

Coming to Finland for the first time for me was nothing but enjoying the diverse life in an unknown country, where even buying groceries was sometimes an adventure. The Finnish language is so different from "common" European languages, that sometimes I try to help myself with Swedish and knowing German and English. Yes, I did roast cucumber instead of zucchini, but there is a bright point to every story – you always learn something from it.

I wasn't one of the typical exchange students: I was curious and interested in getting closer to the Finnish state of mind. I didn't complain about the short days and freezing temperatures. I would just dress myself as a "karhu" [bear] and go exploring. After living in Helsinki for few months, I realized that stereotypes about Finns aren't completely true. I wouldn't say Finns are shy people – we all love our own bubble of peace, don't we? Once you get to know them (perhaps you are the "ice breaker"), they are the warmest people ever, trying to make you as comfortable as possible. I had many amazing experiences meeting Finns around the country and I still meet up with most of them whenever we happen to be in the same place.

Whenever I had time, I took a tram for fun and drove the whole line, watching people and getting myself orientated.

Now, 2 years later, every time I visit the capital it feels like I can totally handle it. The feeling of not getting lost in the city, thinking of the shortest way to walk, not counting stops because you know where to get off automatically, and trying to make simple conversation in Finnish makes me feel like somehow I belong here. After all, an exchange does impact your life forever.

Upon getting all my exams back home done, I went for a holiday to Helsinki and soon I decided to give it a shot and try to find work here. Since it's quite hard to find a job without speaking Finnish, I decided the easiest way was to become an au-pair, and meanwhile, besides studying the language, trying to work in journalism as much as possible.

Maybe Finland feels like second home to me because there are some common things between here and Slovenia. Both are quite well covered with forest and water, have high level of suicides (and both are known as a "drinking nation"). Both nations do well in winter sports and both countries know how to make black sausage (krvavica – mustamakkara).

Interactivity and freedom of creativity could be a short description of their system.

To conclude with some cheering-up words: it seems the spring is finally reaching Finland. Warmer days are coming, so perhaps some booze and ice cream (both very expensive in a Slovenian's eye) will replace the maito kahvi [milk coffee] that Finns drink a lot.