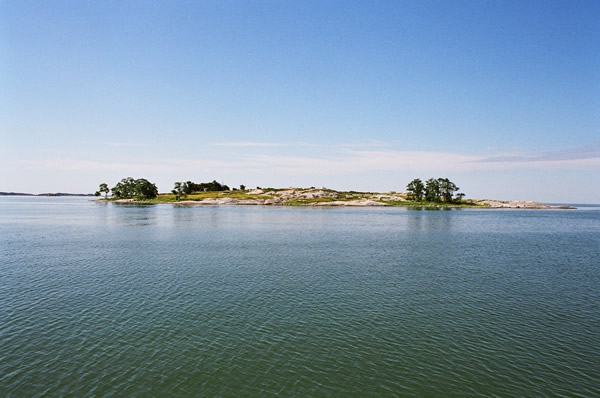 In addition to the uncommon marine characteristics, the Baltic Sea is enclosed by eleven countries, the catchment area is four times the surface area of the sea and home to approximately 85 million people. Human activities are influencing the marine environment, and as a result, the Baltic Sea is one of the most polluted seas in the world.

The Baltic Sea has seven of the of the world's ten largest marine dead zones — areas where the sea's oxygen has been used up. At worst the dead zones cover 90 000 km², more than twice the surface area of Denmark.

The biggest threats to the Baltic Sea are eutrophication, marine traffic, hazardous substances and the loss of biodiversity connected to these problems. The Baltic Sea is one of the most heavily trafficked seas in the world. There are about 2000 ships in the Baltic marine area at any given time, mostly cargo vessels and tankers. More traffic means a bigger risk for marine accidents. Oil catastrophe or other kind of spill of hazardous substances would be critical for already polluted Baltic Sea.

In the recent years the amount of often monitored hazardous substances have decreased considerably in the Baltic Sea, but instead new chemicals are found in researches. Often the substances are accumulating and form cocktails with uncharted impacts on the marine ecosystem or humans. These substances are not currently caught in the wastewater treatment.

In addition to the concentration levels in the Baltic Sea, hazardous substances have been stored to old landfills in the Baltic Se catchment area. These landfills contains serious threat to the diversity of the Baltic Sea. Such a situation is taking place at the Krasny Bor hazardous waste landfill near St. Petersburg. The Krasny Borlandfill is in alarming condition, the waste ponds are leaking and the risk for overflow is high. Urgent action would benefit the residents of St. Petersburg, as the Neva river, the source of drinking water for the city gets its’ share of unknown chemicals from the landfill.

The most severe problem of the Sea is eutrophication, nutrient enrichment caused by the leakages on our food production cycle. Nutrients, phosphorus and nitrogen are essential to all life and used as fertilizers in food production. They are still in many cases wasted in the food production, at homes as well as further up the chain in the wastewater treatment.

However the mineral phosphorus resources are rapidly shrinking. Nitrogen fertilizers, for their part are produced in highly energy intensive processes that accelerate climate change. Nitrogen compounds originating from nitrogen fertilizers are emitted into the atmosphere causing global warming.

It is increasingly evident that a systemic change in our societies is required to keep the planet safe for humans. The same major changes that would help the Baltic Sea would also strongly counteract the climate change. In the international level the EU circular economy package is a step towards that as is the Paris Climate Deal.  For the Baltic Sea the rethinking the food production chain and urban waste water treatment practices are on the top of the list. That can be done already in the national scale.

Forerunner companies have the Baltic Sea on their agenda

The Baltic Sea is an exclusively beautiful and unique ecosystem. The Sea has been under heavy stress of pollution and nutrient emissions for a long time. The countries and different organizations around the Baltic Sea have been working to change the situation since the 70’s. In 2009 Baltic Sea Action Group, BSAG was established to speed up the work. The key idea is that all levels of society are needed to make the change and help the Baltic Sea.

BSAG finds the needed organizations to make public Commitments to act for a healthier Baltic Sea. For example food manufacturers can do their part for by recycling nutrients from their side-streams and by ensuring that the cultivation practices are environmentally sustainable. Commitment maker companies such as Altia, Viking Malt, Sinebrychoff and Fazer are focusing on best farming practices which will lead to reduced nutrient leakage. Through Commitments from such major actors in the sector, one third of Finland’s farm land is already under the influence of BSAG’s actions.

Baltic Sea friendly production and cultivation practices such as using fertilizers based on prevailing need is also linked to higher quality products and better cost-efficiency. The best Commitments help both the Baltic Sea and the Commitment maker.

In the last years BSAG concentrated on advancing nutrient cycling. Nitrogen and phosphorus are nutrients essential to all life and indispensable in food production. In the water bodies they cause eutrophication.

To keep valuable nutrients from the sea and in the use of food production, BSAG works also in the EU level. BSAG has successfully promoted including nutrients in the EU commission’s action plan for circular economy, which was released in December 2015. The plan is functioning as a framework for legislation. The implementation process has started with the fertilizers regulation revision, which BSAG follows closely.

In Finland BSAG has advanced nutrient cycling since 2010 when first Baltic Sea Action Summit was arranged. In 2010 summit the government of Finland made a Commitment to become the model country for nutrient cycling. Today the nutrient cycling can be found for example in the spearheads initiatives of the current government. There it is linked to the piloting new technologies as well as achieving a good ecological status for waterbodies.

Today the best companies are taking environmental responsibility as an asset. Also investors have started to consider sustainable business more risk free and profitable. Taking environment into account when developing strategies should be a starting point for any business - or society.