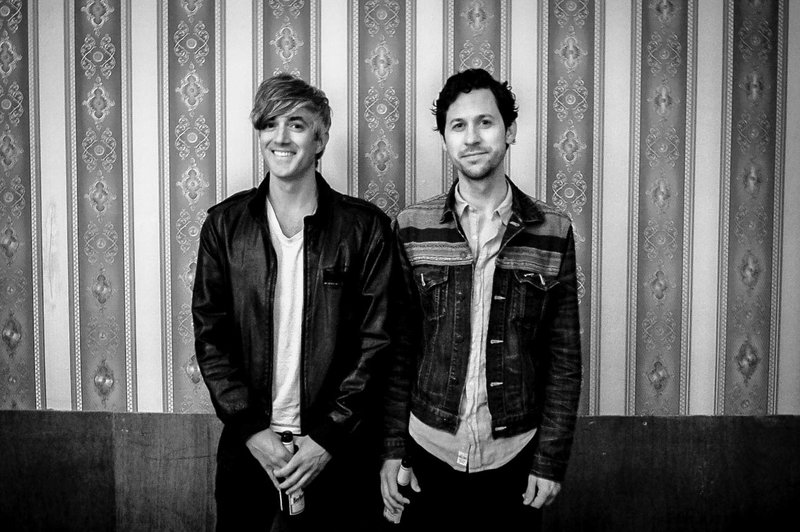 The band burst out of the New York indie rock -scene and gained a cult following with their album With Love and Squalor back in 2006. You couldn't visit a bar or a club in London without hearing “I've got a great idea / I'm gonna wait right here...” blasting out of the speakers at some part of the evening. Ten years later, WaS have undoubtedly proved they were not just a drop in the sea of alt-rock bands that blossomed for a short period in the late 2000s. Since then, the band has seen a few different drummers, but Murray and Cain have kept things together and moved forward.

WaS are well known among their fans for their absurd, whimsical sense of humor that is displayed in their music videos, as well as during live gigs. I'm curious to find out more about their chemistry and how the band has evolved. I arrive at the club as the band are finishing their sound check. After finding a quiet spot for the interview in the outdoor area, we carry over a few chairs with the help of Keith Murray, and are soon joined by Cain, rocking double denim.

I ask the men to paint the scene of how they met while at the University in California, where Murray studied literature and Cain international relations.

“It was at my dorm room and I had a weekly viewing salon – it wasn't like a drunken affair, as I recall – it was scheduled every week and it was based around the airtime of Dawson's Creek, a popular television program of the day,” describes Cain.

“He was actually in a Dawson's Creek book club. It's still the only episode of the show I've ever seen,” Murray laughs, adding, “I think it took about 2 years for music to really enter into it.”

Cain continues, “We were going to concerts, but I didn't play music at the time, so we didn't talk about performing music or anything. I learned a lot of bands, I feel like, through Keith in those days; he was into a lot of cooler bands, he was into indie rock, and I had pretty much been listening to grunge, which was mainstream those days.”

You can definitely hear the influence of bands like Weezer, especially on TV En Francais, their fourth album.

“Rivers Cuomo is one of my favourite writers,” admits Murray. “I really like the lyrics. I really don't know what the hell they mean to me at all, but there's something I like about that sort of lyrical weep from a hyper-personal kind of writing, kind of over-analysing everything.”

The new album sounds clearly very different compared to their early releases. There's an element of nostalgia in the sound, with a distinguishable 80s flavor. I wonder if they still consider themselves as part of the indie rock scene.

“There's kind of two ways of using the term 'indie rock'; one has to do with finances and one has to do with the sound,” Cain explains. “I don't think we're especially indie rock in our sound anymore. I think our first album fit pretty nicely into what indie rock sounded in the US, and since then we haven't particularly sounded very indie rock. It's either been more rock, or now it is pop-rock...”

WaS definitely have a strong element of do it yourself-attitude about the way they exist. To my surprise, they're selling their own merchandise before and after the gig, like it's no big deal, complete with framed misheard lyrics signed by the band. The stand is swarmed by eager fans, and both Murray and Cain seem happy to have a chat with everyone while signing albums and having selfies taken on dozens of phones.

“We made every record bar our second one by ourselves, without a label being involved,” Murray says. The second album, Brain Thrust Mastery, was made with Virgin EMI records, who they left after the album was released. “Since then, we basically make a record with our own money and then we license it to someone to distribute. When the record's done, we're gonna figure out who's gonna put it out,” explains Cain.

Murray goes on, “I think it's more creatively relaxing. Financially, harrowing. We had a lot of fun making the second record and we spent an insane amount of money doing it, mainly because the label insisted that it be done in an incredibly expensive way. It was enjoyable to waste a lot of money that an organization had designated to go to that. But it's definitely unnecessary.”

The band have been active in social media throughout their career, making humorous videos and tour diaries alongside their music. In 2009, they made a short series for MTV UK called Steve Wants His Money, where the band tries to come up with ways to raise money to pay off a loan shark called Steve. They also have a section on their website where fans can ask for advice, anything from career choices to how to get over an ex, and the band answer in their typical nonchalant absurd style. Murray describes being actively involved in social media as something that is enjoyable, but because it is also necessary it can feel like a task.

“Even the  very early days, before social media was really a thing, we dumped a lot of unnecessary time into our website just because we thought it was funny to do that,” Cain reflects, “and so I think social media rewards the same instincts. You can tell when a musician or an actor thinks it's fun to actually do this, and you can tell when it's something they feel compelled to do, or even worse, when it's just that management company handling it for them. Nowadays fans, if they want to know where you're playing or if they wanna find out if you have anything new out, they expect to be able to do that on their favorite social media network. If you're not on Facebook or Twitter or whatever, they're gonna be like 'I guess they're dead, or they broke up' because you're not on here.”

I ask what they would be doing if they couldn't be musicians, anticipating the answer that we'd be seeing more of their handsome faces on the TV. “It would definitely be fun to make a TV-show,” says Murray.

Cain agrees. “I think we would love to make a TV-show. We wouldn't wanna be like... Viners. I feel a distinct generational sort of chasm between us and the generation that's made Vine and short YouTube stuff, update it regularly, that made that kind of an art-form. Not to detract from that at all, I just feel that way of expending your creativity [is] not especially rewarding. It's meant to seem raw, it's meant to seem off-the-cuff. Certainly quick thinkers will do better in it, it's just a different type of thing. I think we love sitting there and messing around with the script and passing it back and forth to each other and making the jokes better, in stead of going 'alright we have half an hour, let's bang out a Vine.'”

Since the first album, it seems like cats have have played a part in almost everything, from album artwork to music videos, merchandise, and tour diaries. I want to hear more about the band's furry muses.

“It definitely started pretty accidentally,” Cain admits. “We had that artwork on the first record because the guy that we had asked to make us artwork had spent 3 or 4 months working on it and like a week before it was due said he wasn't gonna be able to finish it. So we had a friend of ours who was a photographer just shoot those pictures with kittens that had recently been born in Keith and Michael's [the original drummer] flat. So we did a lot of artwork around it, like stickers and T-shirts and stuff and people reacted well to it, as they have in general on the internet with cats. We like the sort of absurd juxtaposition of the name We are Scientists with a cat as our backdrop – they don't have anything to do with each other. Where as, conversely, we've always had a very strict moratorium with photographers where we won't do any imagery related to science because we find it to be just brutally obvious and probably gonna be painful for any of us to look at those. I think cats just resonated with us – we're not particularly cat obsessives by any means.”

I find that revelation very upsetting. Luckily Cain jumps in to clarify. “I mean I've had cats my whole life, I still have cats, and I think Keith recently got a cat while he wasn't even home. His wife got him a cat.”

“There's a cat in my house right now,” says Murray with a smirk. “When I get back it's supposed to be gone. But that's how I got a dog last time. I was away and a dog got adopted, and I said, that's cool as long as it's gone when I get home. And I got home and it was still there, and then it was my dog. So I may own this cat.”

“Yeah you don't have a heart to kick an animal out of your house,” Cain says.

It's getting closer to the time for the main act to take the stage. I ask if can take a few snaps and we move indoors to get some pictures taken in the hallway, as the crowds start pouring in from the doors. I recognize a few faces from a gig in Hamburg a few months back. It's clear that the band still has a strong and loyal following in Europe. Murray and Cain say a show in Helsinki is a possibility, but not until next summer. As the gig starts I find myself increasingly giddy with excitement and nostalgia. They are absolutely fantastic live and the crowd adores them. If my 20-year old self could see me now, she would be so jealous.

What's your favorite WaS song (at the moment)?

CC: We Need a Word

If you had 20€, one hour, and had to throw a dinner party, what would you make?

KM: Get a bunch of avocados and have guacamole for dinner. 20 dollars for avocados and 1 dollar for a bag of chips.

What's your idea of perfect happiness?

KM: Movie, popcorn, and a margarita.

Who's your favorite fictional hero?

KM: Michael Gallatin for sure!

CC: He's a WWII-era spy for the British government, who also has the ability to turn into a wolf.

What's your favorite city to visit?