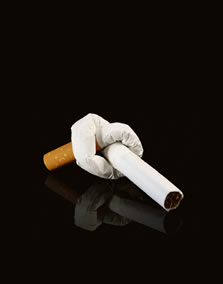 There are two groups of quitters: those who are trying to quit and those who have succeeded. There are also many who generously offer their skills to end this odorous addiction.

Smoking in bars was banned a few years ago in Finland, and nowadays even the memories of smoky bars are as hazy as the cigarette smoke itself. It is still to be discovered if the percentage of all smokers has dropped due to the legislation, but it is a solid fact that as long as there is this unhealthy habit there will be those trying to quit it and also those who will offer help.

One of the past favourites was the book Stop Smoking Permanently (Allen Carr, 1995). After reading it there was simply no need to smoke. Other methods include patches, nicotine gum or worse, some other unhealthy habit. Meanwhile, another kind of help appeared: psychological.

The procedure is rather simple. At a personal meeting, the smoker briefly talks about his relationship with tobacco; describing when and how frequently he smokes, how it affects him and so on. The major part of the session concentrates on the negative effects of smoking. Some healing techniques are almost frightening: “when you light up again, it’ll be the minute you die!” “When I heard that, I was really scared,” recalls Raisa, a devoted smoker for 20 years. “It sounded so serious that somehow it really got into my head. After the session I didn’t even want to look at a cigarette again.”

Convincing techniques vary in their approach. Some recommend keeping a smoking diary in order to observe personal patterns and to recognise what smoking means to the individual. Is it an accompaniment to coffee, a reaction to stress or just an excuse to escape the work place for five minutes? Other specialists use straight forward threats, whilst some play with conscientiousness. “I was told to drink a full glass of ice-cold water after each cigarette I smoked,” says Andrei, who also gave up his addiction with the help of a psychologist.

The session costs on average 150 euros. “At the end of the 40 minute session I was asked to sign a document, saying that from now on I voluntarily reject all nicotine-containing substances. I signed and felt really obligated to obey: I am a responsible adult after all,” says Raisa.

The first few weeks after treatment are often bearable, but it is the aftermath that gets tough. If someone is not mentally ready to quit, there is no force which will make it happen. “Before going to the session, I already made up my mind that I don’t want to smoke again,” says Raisa, “So during those 40 minutes I was only becoming more reassured of my own conscious choice. The weeks that followed were not easy, but I was sure of myself all the way.”