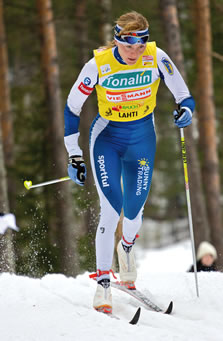 AS FAR AS quintessential winter pursuits go, cross-country skiing lies near the top of the list, somewhere between skinny-dipping in icy water and staying indoors with a nice cup of cocoa.

People who enjoy this activity tend to proclaim its health benefits – cross-country requires the participant to use all her major muscle groups at the same time, is low-impact and aids flexibility. People up here in the North also like it because it’s commonly referred to as Nordic skiing, which means we practically invented it, although the Norwegians do irritatingly well in competitions. Practically every household has skis for the whole family. It’s cheap and egalitarian, and is regarded as a great way to “enjoy” being outside in -15 degrees.

The actual technique takes some getting used to, however. You could do like I did on my first outing, and end up stumbling along, slipping and sliding while looking like a constipated penguin desperately trying to use the ski poles for balance before ending up face-first in a snow drift. When you know what you’re doing, however, you can become a graceful vision of angelic movement, making no sound as you swish through forest paths. It is partly for this reason that Nordic skiing has such a romantic place in the hearts of Finns, as during the Finnish-Soviet Winter War Finnish ski troops used the silent running capabilities of their chosen means of transport to excellent effect while fighting off the Soviet invaders in the eastern forests.

Unfortunately, these days the sport has taken a few knocks, professionally speaking. For many years Finnish sport has had intermittent problems with doping, and cross-country has generally been at the forefront of illegal performance enhancer usage. Just last summer, the former skiing coach Kari-Pekka Kyrö admitted the use of drugs was widespread, and professional skiers are routinely banned for using them. It beats me why anyone would need more than a hot thermos of pea soup and a flask of vodka to help their performance, but there’s no accounting for taste.

Schools are on skiing holiday on weeks 8, 9 and 10. See www.hiihtoloma.fi